Log in Register
Menu
Install the app
You are using an out of date browser. It may not display this or other websites correctly.
You should upgrade or use an alternative browser.

LeafByNiggle said:
With so little training, in the heat of the moment, such people will act irrationally.
Click to expand...

Anyone who is going to act irrationally, in the heat of the moment, shouldn't be left alone with children.
Reactions: Darkhorse
•••
Upvote 0

If teachers have to carry guns in the classroom now to protect students because Republicans would rather make firearms easier to obtain than harder, then will the cost of the gun qualify as a "classroom expense" for the $300 Educator Expense deduction?
Click to expand...

If they are forced to carry one; they should be issued one.
Reactions: Darkhorse
•••
Upvote 0

HARK! said:
If they are forced to carry one; they should be issued one.
Click to expand...

We pay for school supplies and textbooks out of our own pockets -- and you'd be willing to take a tax hike to arm us?
Reactions: wing2000
•••
Upvote 0

We pay for school supplies and textbooks out of our own pockets -- and you'd be willing to take a tax hike to arm us?
Click to expand...

HARK! said:
If they are forced to carry one; they should be issued one.
Click to expand...

Will make rollcall more interesting, that's for sure.

"Come with me, kids" 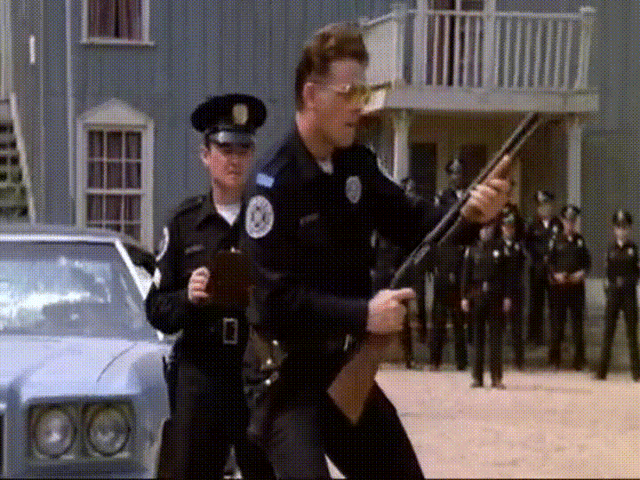 Hank77 said:
That teacher is not mentally stable enough to be teaching.
Click to expand...

No, I think people can lose their mind when it comes to kids.
•••
Upvote 0

HARK! said:
They are unwelcome according to the law.
Click to expand...

The law does not welcome. Humans welcome.
•••
Upvote 0

Just like the biased speculation that citizens with guns save more lives than them lose.
•••
Upvote 0

Hank77 said:
That teacher is not mentally stable enough to be teaching.
Click to expand...

How will you know before he starts shooting?
•••
Upvote 0

hislegacy said:
Why are you avoiding my question - I promise, this will be the last time I ask.
Click to expand...

I do not support removing such checks; if anything, I want more -- at least as many as it takes to become a certified teacher. And I wish that that firearms license was as precarious as my teaching cert.... you'd be amazed how little it takes to get a teacher's credentials yanked.
•••
Upvote 0

HARK! said:
Gun Effectiveness
I checked online and found some fascinating numbers. A good website with footnotes and references to authoritative sources is GunFacts.info...
Click to expand...

Gunfacts.info - not a credible unbiased source.

If you doubt the objectivity of the site above, it’s worth pointing out that the Center for Disease Control, in a report ordered by President Obama in 2012 following the Sandy Hook Massacre, estimated that the number of crimes prevented by guns could be even higher—as many as 3 million annually, or some 8,200 every day.
Click to expand...

Not true. What is true is that the number of defensive uses of guns is estimated by various sources to range from 500,000 to 3 million annually. But it is important to understand what is meant by a "defensive use of a gun." It is far from being identical to "crime prevented by a gun." These statistics are gathered from surveys of gun owners who report a defensive use to be any time they used their gun in what they considered a defensive situation. That would include brandishing your weapon to scare away teenagers who are vandalizing garbage cans or mailboxes. Showing a gun in a confrontation in which both sides feel threatened by the other (family disputes, for example). There is no data on actual serious crimes prevented by any of these "defensive uses" of a gun.
•••
Upvote 0

sandman said:
I agree....And there will not be a substantial change until this country returns to the percepts of the Word of God, which I don't see happening anytime soon... It's taken the devil three generations for the slow erosion of God out of this country and it is highly unlikely a reversal is on the horizon.
That is the reasons I believe we do what is necessary to protect the schools ...I should say necessary and correct.
Click to expand...

But if those measures put the children in those schools in higher danger than they were before, that is not a win, regardless of the intentions. This Ohio law weakens the protection of children by allowing less-trained teachers to take on the role that is normally occupied by highly-trained police officers. It looks more like a cost-saving measure than a life-saving measure. If the legislature really wanted armed teachers to protect students they would fund the necessary training, and even offer a bonus to teachers who took the training. But apparently lower taxes is more important.

Red flag laws like gun laws... have the appearance of good... but are going to be abused by both government and and vengeful citizens;
Click to expand...

But guns in the hands of untrained teachers are NOT going to be abused? Really? Actually, red flag laws have plenty of due process built-in. A judge has to review the application before it is effective, and then it is only temporary pending an evaluation.

And gun confiscation will only enhance the criminal and punish the law abiding...
And while I hate the idea of taking drastic steps to fortify schools.... I hate even worse the thought of another innocent student suffering the consequences of symbolic ineffective laws...
Click to expand...

In other words, gun rights are more important than children's lives.
•••
Upvote 0

hislegacy said:
Can you show me where I said I was opposed to a training program please.
Click to expand...

The main effect of this Ohio law that you apparently support is to weaken the training requirements for teachers carrying guns. Prior to this law, teachers already could carry guns, but only if they were highly-trained.
•••
Upvote 0

HARK! said:
Anyone who is going to act irrationally, in the heat of the moment, shouldn't be left alone with children.
Click to expand...

That applies to all of us. Without specialized training, most people are likely to react irrationally at times. The only way to reduce the chances of that is to insist on intensive training like police officers get.
•••
Upvote 0

Questions:
Might be nice to get some answers before I start keeping a Glock in my desk drawer.
Reactions: NxNW
•••
Upvote 0

LeafByNiggle said:
That applies to all of us. Without specialized training, most people are likely to react irrationally at times. The only way to reduce the chances of that is to insist on intensive training like police officers get.
Click to expand...

And raise property taxes in order to pay for it.
•••
Upvote 0

TLK Valentine said:
Questions:
Might be nice to get some answers before I start keeping a Glock in my desk drawer.
Click to expand...

I live in Ohio. I thought this was a mistake and the type of thing that happens when people wring their hands and say, "We've got to do something."

I have been a firearms instructor and less training is never a best practice. But more than any training deficiency, it must be understood that a certain frame of mind is requisite to pulling the trigger. I don't think most people, and certainly few teachers, are prepared to do that. And the worst situation is not the person who totally freezes up but the wannabe tough guy who forces himself to shoot but closes his eyes or is shaking so bad that he sprays bystanders with erratic fire.
Reactions: Darkhorse and LeafByNiggle
•••
Upvote 0
G

HARK! said:
... the Center [sic] for Disease Control, in a report ordered by President Obama in 2012 following the Sandy Hook Massacre, estimated that the number of crimes prevented by guns could be even higher—as many as 3 million annually, or some 8,200 every day.
Click to expand...

The CDC reported that others had made that estimation. Other also estimate it could be nearly 30 times lower than that. Here's the relevant part from the CDC's summary on defensive gun use:


Defensive use of guns by crime victims is a common occurrence, although the exact number remains disputed (Cook and Ludwig, 1996; Kleck, 2001a). Almost all national survey estimates indicate that defensive gun uses by victims are at least as common as offensive uses by criminals, with estimates of annual uses ranging from about 500,000 to more than 3 million (Kleck, 2001a), in the context of about 300,000 violent crimes involving firearms in 2008 (BJS, 2010). On the other hand, some scholars point to a radically lower estimate of only 108,000 annual defensive uses based on the National Crime Victimization Survey (Cook et al., 1997). The variation in these numbers remains a controversy in the field. The estimate of 3 million defensive uses per year is based on an extrapolation from a small number of responses taken from more than 19 national surveys. The former estimate of 108,000 is difficult to interpret because respondents were not asked specifically about defensive gun use.
National Academies of Sciences, Engineering, and Medicine. 2013. Priorities for Research to Reduce the Threat of Firearm-Related Violence. Washington, DC: The National Academies Press. https://doi.org/10.17226/18319.
​

If guns were so good at preventing crime, surely the most armed Western nation should have the lowest rates of crime...


**I knew this was wrong, because from the mid 1990s onwards, NRA backed politicians successfully blocked the CDC from receiving funding for research on gun violence (starting with the Dickey amendment). The federal budget for such work was below $100,000 per year as of 2013, down from $2.6 million in 1995.

hislegacy said:
Bravo for DeWine and those who choose to protect themselves and the children.
Click to expand...

RIght because that's what we need in schools is MORE guns.

Video: Watch this angry man at a Catholic school kick a pro-life sign — which then flips over his...

Don’t “Back the Blue” Closer than 96 Inches